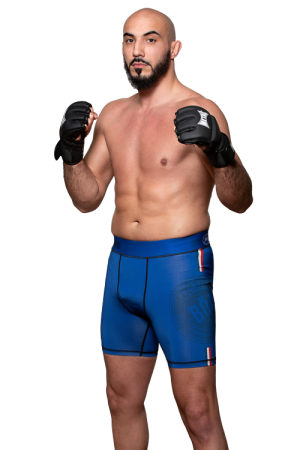 “You have to excel in all combat sports to be the best. I see MMA as a chess game in 4 dimensions.”

Sofiane AISSAOUI or “The Lion” is a 30 year old fighter from Reims.

He started fighting sports with Judo at the age of 4. His father wanted him to practice this sport because he was a very unruly child and sport helped him to canalize his energy. Moreover, the practice of this sport conveyed to him beautiful sporting and human values.
Then, he moved on to MMA at the age of 23. Sofiane started this sport because he had no more pleasure in judo: “I had done the trick”. At that time, he was young and competitive and he considered MMA as a sport where he could fulfill himself. For him, MMA represents the ultimate combat sport.
What made him love this sport was the excitement around a fight. He finds it the most attractive combat sport: the show, the speaker, the enthusiasm.
Sofiane also likes to surpass himself and to prove that one can come from any discipline of combat sports and excel in this new sport.
Sport occupies a large part of Sofiane’s time since his job is a sports educator for young multi-recidivist delinquents.

Several moments have highlighted his career: his first French championship title, his first professional title in his hometown, the first KO of his career, he was also rewarded by the Ministry of Sports: bronze medal for sports and associative commitment. It is the medal that is most valuable to him.
Sofiane Aïssaoui works out his fights at least a month and a half in advance. He goes from physical preparation to technical training, in total, he trains 7 to 10 times a week.