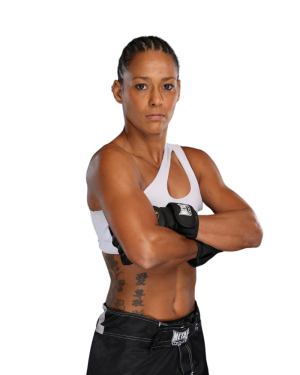 Samantha JEAN-FRANÇOIS is an experienced French martial artist. Fighting out of Aix-En-Provence in France, Jean-Francois has been competing professionally for over eight years.

Her most notable contest came in 2015, when she took on eventual UFC World Champion Zhang Weili in China. She has also competed in the famed Yokohama Arena in Japan for Rizin FF.
Her combat style is strongly striking focused, but she is also a grappling champion and can hold her own when the fight goes to the ground.58
In addition to MMA, she also competes in K1 kickboxing, No-gi grappling and Luta Livre.