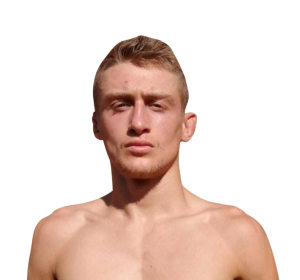 Pierre Ludet, a young 22 year old athlete with a promising career who was supposed to fight in the February 26 competition, passed away before this event, which was so important to him and his family.
We share the pain of his family and would like to present his fighting career in the following lines.

Pierre had started practicing combat sports with Judo at the age of 3. He followed this up with French boxing, then MMA at the age of 13, but also practiced English boxing during his high school years.

Pierre Ludet did not have a predefined training routine. Indeed, he adapted himself according to the availabilities left to him by his profession of policeman. The young athlete trained regularly and more intensively when a fight was approaching.
For Pierre, MMA was a perpetual learning process, because it is the most complete combat sport that gathers all the techniques and practices of combat in one sport. He saw this discipline as an opportunity to improve every day. He said that he could not get tired of this discipline, because it is the most complete sport with always new aspects to improve and practices to deepen.
When he evoked the best memories of his career, he mentioned his first professional fight which ended in a victory by KO, the grail of fighters against an opponent.
Pierre Ludet described himself as a complete fighter knowing how to adapt to all types of opponents.

His next goals as a fighter were to sign a contract with HEXAGONE MMA and to win his next fight in Reims. He finally chose another way. We will pay tribute to Pierre on February 26 in Reims (Champagne region), during the HEXAGONE MMA 3 in which he was to fight.