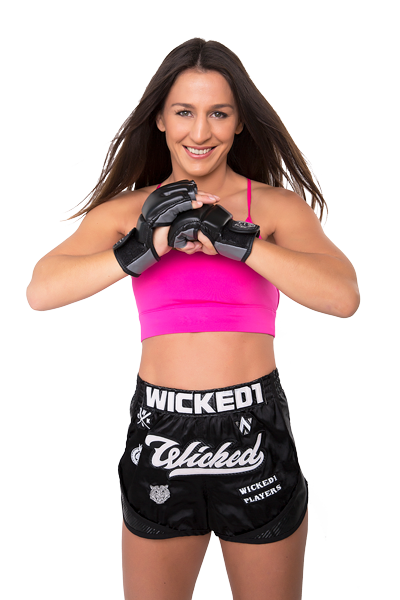 Lucie’s career is the result of a long work and a lot of willpower.

Lucie is a fighter and she has proven it more than once: in the cage as in the Koh-Lanta show or in her personal life. It has unwavering determination.

Lucie Bertaud is also known from the audience for her participation and career on the Koh Lanta adventure real tv program “Les armes secrètes” in 2021, and for her work as a journalist since 2012. She became the first commentator on TV for Women’s Boxing, before establishing herself today as the only female MMA host on French DTT channel L’EQUIPE TV and RMC SPORT. She is also the author of the book “MMA the American Dream” and lifestyle influencer on social: close to her audience, she conveys an image of positivity and surpassing herself and establishes herself as a major fighter in France and internationally.

Lucie Bertaud returns to the cage against Karla Benitez for the CO MAIN EVENT of HEXAGONE MMA#2 at the Zénith de Paris, on October 30, 2021 at 8:30 pm. A return strongly awaited by his fans from Koh Lanta the French #1 TF1 reality show.