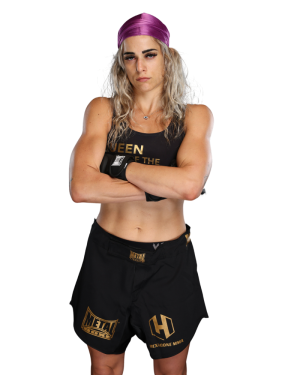 Kate BACIK « Queen of The South »

BACIK grew up in Poland before eventually moving to England. She was introduced to martial arts during her teenage years, and attributed the training as a turning point in her life as she changed her lifestyle completely to pursue a career in combat sports. Having trained in different disciplines, mixed martial arts came naturally to her.
Currently a purple belt in Jiu-Jitsu, she has developed a reputation in the grappling circuit as well, balancing her dream of becoming a world-class grappler with mixed martial arts glory. The passion in pursuing both has helped her to develop a well-rounded style that can exploit her opponent’s weaknesses.