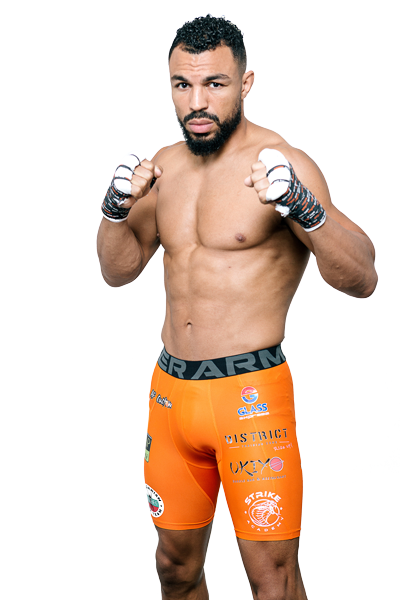 An experienced fighter, Karl AMOUSSOU is renowned for his determination and audacity.

At 35, after years of coaching and championship training, Karl returns with an even stronger mind.

He is the highest ranked French Welterweight fighter of all time and is one of the legends of the French MMA with 38 fights to his credit.

Gregmma, figure of the MMA, ranks him #8 French fighters of all time and the MMA4fight site ranks Karls as the #8 over the last decade in all categories combined. He is also Bellator champion, Cage Warriors champion and Dream, Strikeforce and M-1 veteran.

Karl AMOUSSOU has not always been a professional athlete! He was also a man of action, a police officer at the Paris area BAC (anti-crime police corps).

A few years of MMA practice convinced him to devote himself entirely to his sport and a new career as a professional fighter, a radical change difficult to experience both professional and personal lifes. You have to build everything and manage your family life with a little girl a few months old and no gym or training place…

Karl chooses to become his own coach and train hard to return to the highest level. This period was one of two major injuries that he overcame in 2020. Then 10 workouts a week for several months to be among the first to get back into a cage on French soil. Work pays off, he finally joins the new French class and participates in HEXAGONE MMA 1 on July 9, 2021 from Paris live to 70 countries.

Karl Amoussou will try to win the World Champion -77Kg title against Brazilian fighter André SANTOS at HEXAGONE MMA 2 in Paris, on October 30, 2021 at 8:30 pm.