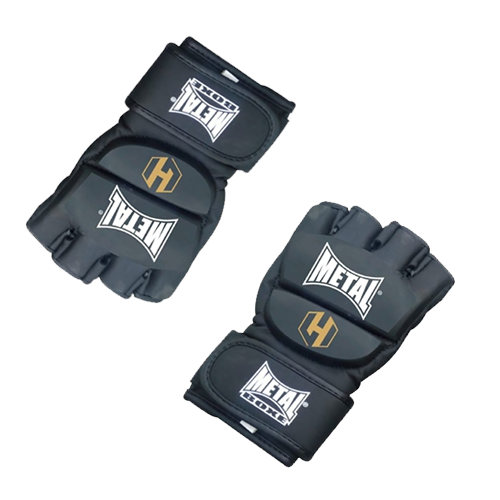 METAL BOXE-HEXAGONE MMA Gloves will be available for the public from the next event on Feb 26, 2022 in the REIMS-ARENA, in the heart of the Champagne region. Also available online on the HEXAGONE MMA website.

Following a fruitful partnership on the first shows, HEXAGONE MMA and METAL BOXE have signed a sponsoring deal for season 2021-2022. The Combat sports Equipment company becomes Official provider of the Gloves for the HEXAGONE MMA organization.

METAL BOXE now #1 brand in France, has been providing for 20 years technical and high range equipment rapidly reaching trust of fighters when it comes to quality and performance. Designed and R&D made in France, METAL BOXE aesthetics and quality products equipment are available in specific sports and combat sports retailers throughout the country. With this agreement, METAL BOXE is appointed as Official Equipment sponsor and will, in addition of the HEXAGONE MMA gloves, also create a dedicated co-branded apparel available on HEXAGONE MMA e-shop.

” From preliminary discussions on the HEXAGONE MMA project with METAL BOXE to their reactivity at launch phase ahead of first show, we have been impressed by their professionalism and the huge quality of their products.
It then became obvious to deal with French #1 manufacturer in combat sports equipment. We are very confident that our fighters will be in best possible hands when it comes to MMA gloves with METAL BOXE products.
We are proud of this new sponsoring partnership for season 2021-2022 and are sure that with METAL BOXE on board, HEXAGONE MMA will provide its professional fighters the best equipment to train and fight in the cage during all HEXAGONE MMA shows.
I also think that this deal between to major players in the rapidly growing French MMA market will impact awareness and lead to an even faster development in this country..” has explained Jérôme Pourrut, HEXAGONE MMA President

Jean-Jacques CORDOMI & Marc GALINIER, co-founders of METAL BOXE have added : ”We are very proud of the partnership with HEXAGONE MMA. We have never seen in France such an impressive organization in combat sports. The very specific care in the show production combined with the quality of the fight cards creates a major show for all combat sports and MMA fans. This is just the beginning of a new adventure and METAL BOXE will play its part by providing fighters the best equipment.”